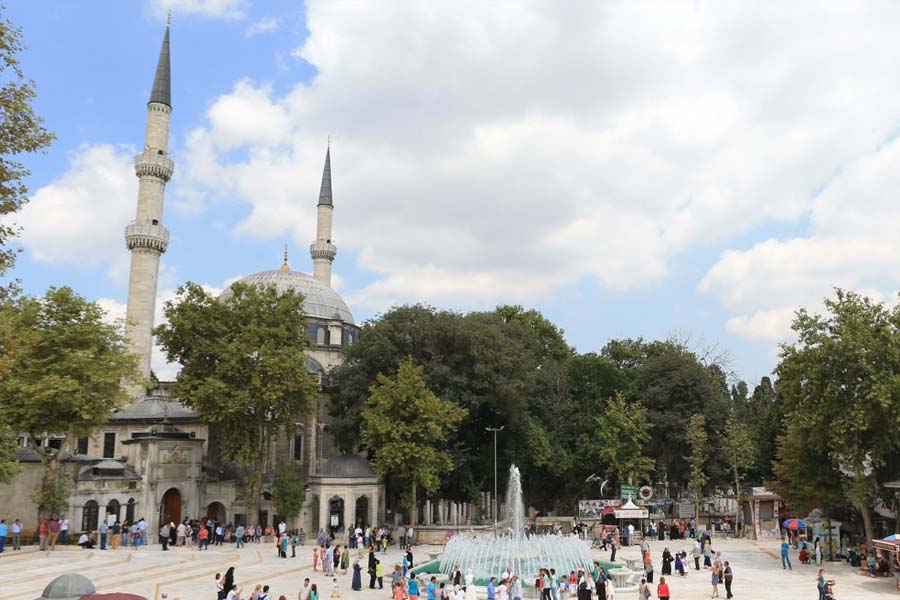 Spend 10 days exploring Turkey from Istanbul to Cappadocia, and visit important historical, archeological, and natural sites. Enjoy a full-day tour of Istanbul, marvel at the fairy chimneys in Pasabag, explore the ruins of ancient Ephesus, and more.

Discover the wonders of Turkey from Istanbul to Cappadocia on a 10-day guided tour. Visit the main Byzantine and Ottoman sites in Istanbul, the historical battlefields and memorials at Gallipoli, archeological sites in Troy, Pergamon, Ephesus, and Hierapolis, and marvel at the natural wonders of Cappadocia.

On arrival at the Istanbul airport you’ll be transferred to your city hotel. Overnight in Istanbul.

Tour the Sultan Ahmet area in the heart of the Old City, from where the Byzantine and Ottoman empires were ruled. Visit Hagia Sophia, one of the greatest marvels of architecture, constructed as a basilica in the 6th century by Emperor Justinian. Admire the Blue Mosque, facing Hagia Sophia, famous for its blue Iznik tiles and its 6 minarets.

See the Hippodrome, the ancient center of sporting events and political activities. Take in the Obelisk of Theodosius, the Serpentine Column, and the German Fountain of Wilhelm II. Explore the covered Grand Bazaar, the biggest souk in the world with nearly 4,000 shops selling antiques, jewelry, gold, carpets, leatherwear, and souvenirs. Tour Topkapi Palace, the residence of Ottoman sultans, and see exhibits of Chinese porcelain, weapons, calligraphy, and more.

After breakfast you’ll explore the famous archaeological and mythological site of Troy, home of the Trojan Horse and Helen of Troy. Then you’ll continue on to the city of Pergamon, an important center in the Hellenistic and Roman eras. Overnight in Kusadasi.

Your tour begins at Isa Bey Mosque before the drive to Ephesus, an ancient Greek city and later a major Roman city, situated on the west coast of Asia Minor. See the Celsus Library, the Temple Of Hadrian, and the Trajan Fountain.

Enjoy an open buffet lunch at a local Turkish restaurant, and then in the afternoon visit a carpet cooperative to see how Turkish carpets are made by hand. Continue to the shrine of the Virgin Mary, at the site where she spent the final years of her life. Explore the Ephesus Archeological Museum to see artifacts from local excavations and take in the Temple Of Artemis (Diana).

Before returning to your hotel you’ll see a fashion show at the leather outlet center. Overnight in Kusadasi.

Visit Hierapolis, noted for its healing thermal waters and mineral baths, and marvel at the beautiful snow-white petrified waterfalls. Tour the ruins of the ancient city, and see the magnificently preserved necropolis, the main street and gates, and the thermal baths. This is the end of the day’s tour or you can opt for the Silk Road extension.

You’ll travel from Pamukkale to Cappadocia by way of Konya, where you’ll stop to visit the Mausoleum of Mevlana, the great mystic poet and Islamic spiritual leader who founded the Whirling Dervishes sect. See the 13th-century Seljuk caravanserai known as Sultanhan in Konya as well.

Drive to Cappadocia, where you’ll spend the night.

Your first real encounter with the other-worldly Cappadocia landscape is in the Devrent Valley. Visit the fairy chimneys in Pasabag, where the voice of the wind harmonizes with the songs of the fairies. Afterwards you’ll stop in Avanos, the center of terracotta art.

After lunch you’ll visit the famous Goreme Open Air Museum to see the best examples of Byzantine art in Cappadocia. The tour finishes at the Uchisar Rock Castle, where you’ll have a panoramic view of the valleys. Stop at a carpet cooperative to see how Turkish carpets are made by hand.

From your hotel you’ll head to the Red Valley, where you’ll see the famous rock-cut churches and enjoy a 5-kilometer hike through the Gulludere Valley. Before lunch you’ll also visit Cavusin village.

After your lunch break the tour continues on to the Pigeon Valley. Stop at Kaymakli Underground City, where early Christians lived in fear and faith in one of the most interesting underground settlements in Cappadocia. The underground city was originally carved out as 8 floors, but only 4 floors can be visited today. The tunnels are still in use as storage areas, stables, and cellars.

On the way back to Cappadocia you’ll stop to see the natural castle at Ortahisar.

You’ll have free time until the transfer to the airport or the optional Istanbul extension.